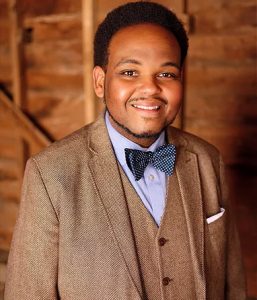 A nationally renowned conductor and educator with a vision for equity and justice through song is the guest for the next edition of “Maestro Moments,” the free online series of musical conversations sponsored by the Corvallis Repertory Singers.

Tesfa Wondemagegnehu, the conductor of the Viking Chorus and the Chapel Choir at St. Olaf College in Minnesota, will join Dr. Steven Zielke, the artistic director of the Corvallis Repertory Singers and the Patricia Valian Reser professor of music at Oregon State University, for this live conversation on Sunday, January 10 at 3 p.m. The Zoom session is free, but registration is required. Click on this link to register: http://bit.ly/3b4un4H

In addition to his work at St. Olaf, Wondemagegnehu has served as the guest artistic director of one of North America’s largest LGBTQ+ choirs, Minnesota’s One Voice Mixed Chorus. He teaches music and social justice with the goal of helping to address social injustice through music, dialogue, and inspiration.

A Memphis native, Wondemagegnehu (Won-deh-mah-gehg-NEH-hu) previously served as the director of choral ministries at Westminster Presbyterian Church of Minneapolis, where he co-founded Justice Choir, a grass-roots movement dedicated to collaborative power through singing. In 2018, he served as guest conductor of the children’s choir at the Aspen Music Festival, where he led the singers through the Justice Choir Songbook. In 2019, he was named artist-in-residence for the Harvard University Glee Club and worked on the W.E.B. Du Bois Musical Project, meant to honor Du Bois, the first African-American to study for his doctorate at Harvard – but who was excluded from the Glee Club.

He has collaborated with American Public Media’s Julie Amacher on nationally distributed radio programs on Black music. And he has conducted and given master classes, workshops and clinics throughout the United States and worldwide, in addition to crafting new arrangements of classic African-American spirituals.

Wondemagegnehu holds a master’s degree in choral conducting and vocal performance from Florida State University and a bachelor’s degree in vocal performing from the University of Memphis. While teaching high school, he was named Orange County (Florida) Public School Teacher of the Year and received the Macy’s National Magic of Teaching Award.

The Corvallis Repertory Singers, a professional choral ensemble, typically would be preparing for a concert at this time of year. But with the coronavirus pandemic putting a hold on live performances, its members have found new ways to reach out to audiences, including the “Maestro Moments” series and a virtual choral performance of “We Wish You a Merry Christmas,” which was recently posted on its new YouTube channel. Search for Corvallis Repertory Singers on YouTube to see the two-minute video.

What: “Maestro Moments,” a monthly series of live online conversations with Dr. Steven Zielke, artistic director of the Corvallis Repertory Singers, and guests.

When: 3 p.m. on the second Sunday of each month through February. The Jan. 10 session features Tesfa Wondemagegnehu, conductor at St. Olaf College in Minnesota and a leader in the Justice Choir grassroots movement.

Where: The sessions are held online via Zoom.

How much: The event is free and open to the public, although registration is required.  To register, go to this website: http://bit.ly/3b4un4H

Up next: The Feb. 14 session is scheduled to feature Steph Johnson, a singer and guitarist who is the co-founder of the Voices of Our City Choir, a San Diego chorus featuring people who are unsheltered. The choir was a semifinalist on the 15th season of “America’s Got Talent.”

For more information: To learn more about Wondemagegnehu, go to his website, https://www.tesfawon.com/