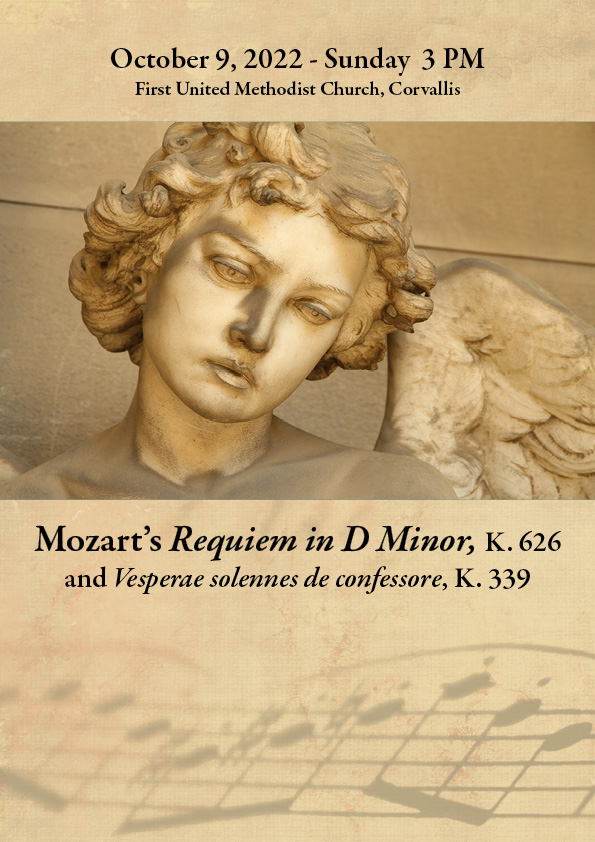 That’s Dr. Steven Zielke, artistic director of the Corvallis Repertory Singers, talking about the ensemble’s Sunday concert – and displaying a burst of showmanship that Mozart himself likely would have appreciated.

The story behind the Requiem has been wrapped for years in flights of fancy. In 1791, an ailing Mozart accepted a commission from an unknown patron to write the Requiem. In the play and movie Amadeus, the creation of the Requiem is part of a plot by Mozart’s rival, Antonio Salieri, to murder Mozart. (To be fair, the writer of Amadeus, Peter Shaffer, never claimed that his story was particularly factual.)

In truth, the unknown patron almost certainly was Count Franz von Walsegg-Stuppach, an eccentric aristocrat who had a reputation for claiming credit for music written by other people. In any event, Mozart died before he finished the Requiem. Mozart’s wife Constanze handed off the work to his pupil, Franz Xaver Sussmayr, who now is generally credited with completing the piece.

Beethoven, a huge admirer of Mozart’s work, gave this famous assessment of the Requiem: “If Mozart did not write the music, then the man who wrote it was a Mozart.”

The work remains “one of the most famous pieces in Western classical music,” said Zileke, who also serves as the director of choral studies at Oregon State University. “And it’s always a treat for musicians – especially singers, many of whom have performed this at various times in their lives.”

But don’t give short shrift to the other work on Sunday’s program, the lesser-known Vesperae solennes de confessore, which Zielke called “an equal joy, full of life and punch, by the young but completely capable Mozart, still stuck in Salzburg at the age of 24.”

“For me, the joy of this concert is this immersion in the mind and heart of Mozart,” Zielke said. “The contradictions of fearlessness, joy, persistence, and some terror — not only for the string players ripping through sixteenth notes at a breakneck speed, but for singers traversing the sometimes-angular counterpoint.”

Zielke added: “The entire operation is a celebration of the kind of arts and culture possible in Corvallis, a town that brings OSU faculty and students, OSU graduates, community members, and Oregon professionals together.”

Tickets to Sunday’s concert are still available at the Repertory Singers’ website, repsing.org. Tickets are $25 main floor, $20 balcony and $5 for students.